Prayer is a skill that allows you to devote yourself to the Gods, and in return you gain aid from them whilst in combat. To train Prayer, you must offer bones to the Gods, either by burial or other methods discussed later in this guide. When you activate your Prayer(s) or buy prayer via spend some Runescape Gold,they will slowly drain your Prayer points (Which can be found in the top right corner of your screen next to your mini map and will be indicated by a small Prayer icon.) until it has reached 0. At this point you must recharge your Prayer with a potion or by praying at an altar. Prayer is very useful for combat, with several bosses that heavily rely on protection prayers. With prayers active, it allows you to kill these bosses faster and lessen your chance of death.

Prayer can give you a huge advantage when facing even the meanest of enemies during combat. It can come in handy if you need an extra burst of strength, a moment of being invincible to magic, or even a faster healing time! Since there are so many things it can help with, Prayer is a skill worth getting better at, even though it can be quite tedious at times. 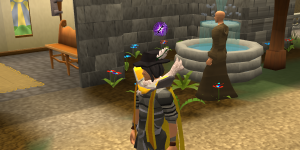 The Prayer menu can be found in the Prayer tab under Powers. The Prayer will be blacked out if you can not use it. It will be in its normal colour if you can use it but has not been activated. When a Prayer is active, it will have a golden outline around the icon, or the prayer icon will appear over your characters head.When you pray to the Gods of RuneScape, they will help you by making you instantly stronger, or un-affected by a foes’ attack, depending on the prayer that you use. To use more prayers and to make them last longer, you should bury bones which are dropped by many monsters throughout RuneScape.